I rode my bike to a date last night (after a quick poll to see if it was cute or lame). The date was awesome, and while I am trying to manage my expectations, I am squeeing just a bit on the inside. The date, however, isn’t the topic of this post, it’s my bike I want to talk about.

Meet Elphaba (my date even asked if she had a name, points for that): 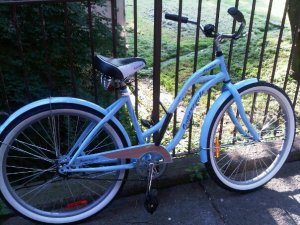 Isn’t she pretty? I’ve been making an effort to ride my bike more this summer – I am not one of those year-round people who bikes in three feet of snow. I love my bike, and I love how it feels to ride my bike. There is something of a special connection with the city when you’re riding, particularly at night. I do have to plan my routes quite carefully: she is neither built for speed nor hills, as she has one gear and pedal breaks. I will not be winning any road races or taking long distance trips with her. But I live in the heart of the downtown core, surrounded by mostly flat roads, lots of bike paths, and if I don’t know where I’m going, this site gives me the option between fast, safe, and safer routes (I invariably go with safer).

That being said, sometimes biking in Toronto is the stuff of nightmares, and I’ve developed a bit of a love/hate relationship. I hate wearing my helmet, but getting my tire caught in a streetcar track and falling in the middle of the street scared me enough to at least buy one, and anytime I don’t wear it (like last night), I get a horror story from another biker (like my date). Traffic is actually the least of my worries when I’m getting around, since I’m either in a bike lane or on a side street. The most nerve-wracking part is riding beside a bunch of parked cars. I know so many people who have been doored, I am on high fucking alert any time I ride past a parked car. Brake lights, people in the front seat, signs of movement all give me a knot of anxiety. I feel physical relief when I pass the stretch of College street with parking and only have to deal with cars already in motion. Pedestrians are a bit frightening as well. They tend of only look for cars when they step out into the street, and while they would be hurt in a collision, so would I.

I won’t let these things deter me from taking Elphaba out, but you may just see me with a broken something or a bad case of road rash sometime in the future.

2 responses to “Wheels up”