It’s no secret that I am not a huge fan of my full name (if this is news to you, please see yourself out, as the name of the blog is a big goddamn clue). I’ve written before about why I don’t feel Stephanie fits me, but today we’re going to focus on a whole new level of name shame: the middle name.  On its own, my middle name isn’t bad, and if you have this name, I mean no offence to you (or your parents for choosing said name). However, for reasons I will get into, I have been seriously contemplating changing my middle name for quite some time now.

‘Alright Steph,’ I imagine you saying, ‘it can’t be that bad. Stop delaying the inevitable and just tell us your goddamn name.’ Fiiiiiiiine. My full name is Stephanie Jean. It goes with my family members Dorothy Jean, Brenda Jean, Bobbi Jean, and Tina Louise Jean (that sound you hear is the Deliverance soundtrack, don’t worry, that comes with the names). Jean comes from my great grandmother Georgina, which is a fucking lovely name!

Stephanie Jean sounds like someone who lives on a farm, Stephanie Georgina is SO much nicer! However, Stephanie Jean is the name my parents would yell anytime I got hurt (often) or in trouble (less often, but still happened). My dad liked to holler JESUS CHRIST STEPHANIE JEAN any time I went to him wounded or bleeding (like the time I fell into the water heater pipe, or when they came home from Canadian Tire to find me bloodied on the porch, still wearing my rollerblades). Everything about my childhood is so very Stephanie Jean that I’ve received some backlash from friends about the potential change. Many of my childhood photos are reminiscent of a 40-year-old Hungarian woman, and she is definitely not a Stephanie Georgina: 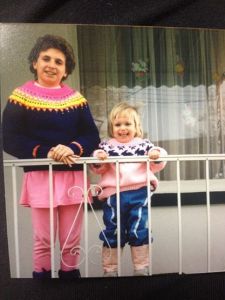 Honestly, everything about me fumbling through adulthood is still the definition of Stephanie Jean, so they may have a point. Stephanie Jean tried to put two bulbs of garlic into a stir fry; Stephanie Georgina would know better. Stephanie Jean has a string of (seemingly) never-ending dating disasters; Stephanie Georgina seems the type to have a perfectly lovely (albeit possibly boring) boyfriend whose name may or may not be followed by Roman numerals. It’s nice to think that I could change my name at any time, if I really want to, but I guess I’ll let Jean hang around a little while longer. Besides, my upper case G looks like shit, and that will totally fuck with my signature.

One thought on “Stuck in the middle with you”