I’m taking another break from the world of online dating to regroup and focus on all the awesome currently in my life, but don’t worry, I’ve got lots of material (I know you were panicking for a minute there). I’ve talked about my strategies for running into people you know on Tinder, but what about the other motley crew of dating sites? I’ve been on a bunch, my friends have been on a bunch, and the Toronto dating scene isn’t so large that our paths were unlikely to cross.

One site, OKCupid, does this (not so lovely) thing where it takes your answers to the seemingly infinite list of questions and turns them into a personality graph — charting you as more or less than the other users for categories like affectionate and traditional. I didn’t realize it does this even for non-public answers, so I ended up with some pretty spectacular results. When you’re looking at someone’s profile, they suggest similar users and attach a personality trait. I popped up in my friend’s suggestions with this gem: 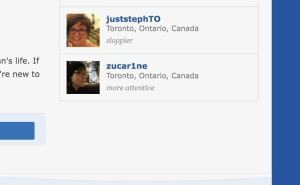 REALLY, OKCUPID? This is you doing me a solid and helping me find people? The ladies above and below are labelled as attentive and I get fucking sloppy? What the fuck kind of guy is going to say to himself, ‘I really want Slopster McGee in the middle there.’ Oh right, the kind of guys who messaged me and ended up in this blog.

Obviously, my friend found it hilarious. This happened well over a year ago, and we were talking about it again just this week. I almost snorted my drink all over the table when he told me his issue is with the choice of the term sloppy. ‘It makes it sound like you have Spaghettios in your hair or something.’ Listen, I may be on the messy side, but that has never happened (as far as I can recall). Maybe I’ll use that as an opener from now on. ‘Hey guys, I may be sloppy, but at least I don’t have food in my hair.’ I’m going to be the belle of the ball now.