I’ve waxed poetic about Tinder a couple of times now, but don’t worry, I’ve always got more to say. Here’s something I haven’t touched on: what to do when you start running into people you know from the outside world. Or even more fun, repeats who don’t recognize you and your ever-changing hair.

Singles in this city know how small the Toronto dating scene can be. It goes from ‘Wow, what a small world,’ to ‘This is like a bad high school reunion,’ in record time. I have had everyone from close friends to dudes I’ve hooked up with to people I’ve dated show up in my Tinder feed. Since you lose all your data every time you delete it (which I often do, but keep coming back — I have Stockholm Syndrome), you can even match with these people multiple times! The friends are my favourite. If we’re friends, you sure as shit better right-swipe me. You’ll get fun messages like this:

This is my good friend Sachin and he’s been tormenting me since university. The first time I saw his profile, there was a grammatical error. I sent him a screenshot and  yelled that he was trying to kill me. He actually does use horrendous grammar on purpose to destroy my soul. He also sends me helpful texts with messages like, ‘You haven’t posted a blog in 7 days.’ You can thank him for many of these updates. But don’t, that will just encourage him.

Another gem, courtesy of my friend Charlie: 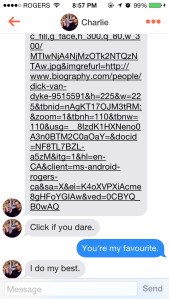 Then there are the repeats, people you’ve talked to, and people you’ve dated. My tactic: right-swipe them, and if they don’t do the same for me, they’ll never be the wiser. If they do, I make a joke because that is what I do. Ha ha, this isn’t awkward at all, ha ha. I recently re-matched with a guy I had made it to the texting stage with a while ago before he went on vacation and ghosted. No reply. Y U right-swipe me if you don’t want to talk, bro? Sometimes I wonder if Tinder has become our generation’s Pokémon. My Tinder graveyard is growing so rapidly that I think it’s less about meeting people and more about collecting faces like trading cards. Gotta catch ’em all.

Other fun things in the world of online dating: the unmatch/block. Say one wrong thing, and BAM! You’re out of there. I’ve used this handy feature myself, usually any time someone mentions their genitalia/my boobs/their horrific political affiliations. However, it has been used on me a time or two.

Just today, I had the best unmatch/rejection ever. A guy asked to play two truths and a lie, so one of my truths was that I have eaten dog. Sure, I’m a vegetarian now, but when I was a meat-eater, the opportunity arose (I did teach in Asia). He said he hoped that was my lie, and when I told him it was a ‘when in Rome’ thing, *poof* he had disappeared from my text window. Oh honey, if that is enough to scare you away, you don’t have the stomach for some of my really good stories.