If last year’s theme was grow, this year (all 31 days of it thus far) seems to be focused on flow. More specifically, going with the aforementioned flow. I don’t know when and I don’t know how (sidebar: if you’re not singing The Little Mermaid after hearing those lines, I don’t think we can be friends), but some sort of shift happened to me, leaving a much calmer, , more collected Steph in its wake. Well, two out of three ain’t bad. I can’t pretend to be a cool kid when I get so awkward and tongue-tied around a cute guy at work that I end up ignoring him completely. I’m no expert, but I don’t think that’s the best strategy. Baby steps, people.

I have been significantly less awkward on actual dates lately. Since I mentioned that I would be going out with a couple, more than a few people have been pressing for details. Fear not, friends, I’m here for all your vicarious Toronto dating needs. I had a momentary pre-date wardrobe freakout— turns out I dress nicer when there are two people – but overall I was not nearly as nervous as I thought I would be. Curious definitely, as this was a first for me, but that was to be expected. I had dinner with a friend beforehand, and she said she thought it wasn’t a ‘real date’ when I told her about the twosome. For some reason, that comment really ruffled my feathers. Sure, it’s not exactly typical, but that doesn’t make it any less ‘real.’ Besides, in my experience typical = batshit crazy, so I am down for something outside the norm. Jack and Sally (so named for our shared love of Disney and their overall adorableness) did not disappoint. They were so fun and at ease, and they seem the kind of couple that brings out the best in each other. At no point did it feel like an interview (my only real concern with the two to one dynamic), we got along like a house on fire, and there was nary a weird or awkward moment. They are definitely my people (nerds in the best way, of course), and there has been discussion of getting together in the near future for strip spelling bee events and homemade pie. Be still my hipster-adjacent, nerdy little heart.

I also had a great evening with the strip club guy — hereafter referred to as Ben because I refuse to use the nickname he came up with: Man Candy. Nope. Ben also noted that he only got three sentences last time, so here are more. Be careful what you wish for, friends. This is another atypical situation, at least for me. We started talking in the summer, but didn’t end up getting together until we popped up on each other’s radar again on both OK Cupid and Tinder. His profile stated he was polyamorous and partnered, and he made sure to tell me as much within the first five minutes of the gay bar/strip club extravaganza. I know my last experience with polyamory didn’t exactly go well, but this time I am able to make a fully informed decision. Maybe that full disclosure explains why there hasn’t been even the slightest feeling of jealousy or insecurity on my end. I can be a very jealous person, and I’m fully aware of this. Apparently it’s not music that soothes that savage beast, but information.

Our timing isn’t the greatest as he’s going through a breakup (I’m used to dating post-breakup, not during), but life is always messy and there are never good times. Even though there are times we’re less broken and others when we’re still waiting for the glue to dry after being pieced back together, it’s still just time in the end. Besides, being a goofy jackass to cheer someone up is something I excel at. I will send you stupid videos of weird animal noises and inane facts like a champ, among other things that I don’t need my mom reading about. What I’m saying is my texting game is strong. Who could resist a charmer like this: 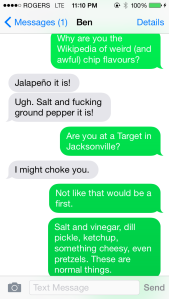 What can I say, I am picky about chips (and the salt and pepper proved me right). This conversation is made 167% funnier with the knowledge that he was in line with those gross bags each time I vetoed them. I also posted it here as insurance against possible murderizing. Honestly though, it’s all been very calm and almost old-fashioned (minus the exotic dancers and girlfriend) and lovely, so I’m just going with it.

With Ben and Jack and Sally (and my life in general) things that should be weird aren’t, and that’s just fine with me. In fact, I’m just going to flow like a motherfucker until it isn’t.

One thought on “Even flow”