A few months ago, despite my affection for the stoop and my generally awesome apartment, I started thinking about moving. I missed the neighbourhood I used to live in and I longed to live on my own again.

Then along came Bogart. I talked about my apartment daydreams with him, and he sort of tiptoed around the idea of eventually living together. ‘Well, you know …’ I stopped him before he could say anything else; it was far too soon to have that conversation. ‘You can’t say it hasn’t crossed your mind,’ he said, and he wasn’t wrong. But there’s a big difference between me thinking something and him verbalizing it. Or at least there is to me, so I needed another month and a few freak outs to really consider the idea. It made sense when I gave it a chance, and then all of a sudden I wasn’t just on board, I was captain of the S.S. Cohabitation.

Once I warm to something, I go into full planning mode. I’ve been creeping Craigslist (and trying not to cry about rent in Toronto), making imaginary floor plans, and I’ve even started getting rid of some of my shit that I don’t want to carry down three flights of stairs. Not a lot of shit, but less shit is still less shit. I envisioned moving to a beautiful, two-bedroom walkup in the so-hipster-it-hurts west end on a sunny late spring/early summer day, not too far off but not so soon either. Bogart was leaning more towards fall, but I had a firm vision of being in a new place for the summer before he came along, and I can be a bit impatient once my mind is made up. This weekend, Bogart said his roommate is leaving the city, so we have a firm date – May. I am going to live with a non-roommate boy. In four months. For the first time in my life. Ahhhhhhhhhhhhhhhhhh.

So shit got pretty real and I had a few more Tiny Steph Freak Outs™ (mostly in my head, I have a great game face). Then I calmed my tits and realized this is exactly what I wanted. It just takes me a minute to adjust from transit daydream material to holy fuck this is happening.

Other people’s reactions have been varied, some hilariously so: 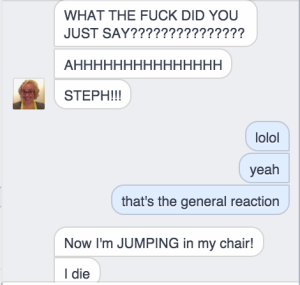 Besides, think of all the Steph disaster blogs that will result.

2 responses to “Get movin’”